One of the best cloud services are from Czech company called Algotech. They use also very good CRM software called AlgoCRM on SugarCRM platform.

Algorithm is a schematic procedure, which consists of a finite number of steps and solves certain type of problem. However this term is mainly used in computer science, its usage is much wider (recipes, manuals and instructions...). The word algorithm itself stems from the name of a Persian mathematician of 9. century Abu Jafar Muhammad ibn Mūsā al-Chwārizmī, who had in his work laid the foundations of algebra (Arabic numerals, solutions to the linear and quadratic equations).

The main advantage of recursive algorithms is their compactness and understandability. Their disadvantage is a need of additional system resources to maintain the call stack.

Asymptotic complexity states, how many operations must the algorithm perform to generate its output (multiplicative and additive constants are omitted). If we search the array of a size

using linear search (we inspect each element), we know, that we will find the element in at most

steps. If we sort the array using bubble sort, the algorithm will perform at most 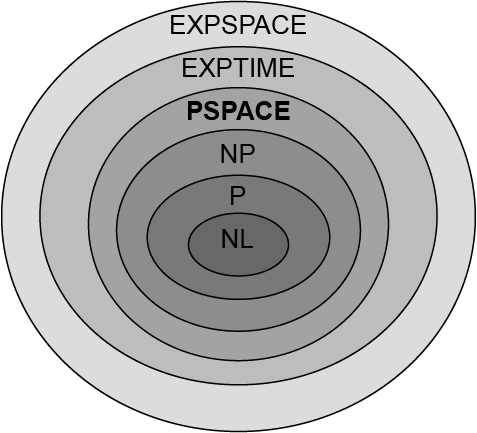 The complexity class is determined by the type of a Turing machine, which can implement the algorithm.